This week is National Careers Week in schools and to coincide with this, Now Teach have worked with YouGov to produce a report examining levels of career satisfaction and career change expectations in Britain.

Astonishingly, the research found that 32% of people in Britain were dissatisfied with their careers. Scaled to the entire population that means over 8.3 million workers in Britain are dissatisfied.

Nearly a third of these (27%) have no expectation of career-change and believe that in ten years they would be in the same or similar job. This would equate to 2.3 million people in the UK stuck in dissatisfying careers.

A further 19% simply didn’t know where they would be working in 10 years.

Katie Waldegrave, Executive Director of Now Teach, said: “This week thousands of young people are trying to think about their future as part of National Careers Week. At the same time there are millions of adults who are bored of their careers, but who are not thinking about making a change. We want to bring these people together for the mutual benefit of both.

“Evidence shows that dissatisfaction with work is a social issue. Studies have linked low job satisfaction to low productivity, while a lack of meaningful work is associated with poor physical health as we age. If you are dissatisfied with your career, making a change can have a real impact.”

Pride in one’s work was singled out as the key to a satisfying career.

An internal survey of current Now Teach participants showed that a move into teaching had had a positive effect both on their own self-worth and on their status.

Lucy Kellaway, co-founder of Now Teach and former Financial Times journalist, explained: “I had expected a rise in self-worth to come from doing something as worthwhile as teaching. But I’m amazed and heartened to discover Now Teachers, many of whom used to do high status jobs in professional services, have experienced an increase in status by dint of moving to a career that has traditionally suffered from low status.”

Khasruz Zaman, a Now Teach maths teacher, described why he left his career as a corporate lawyer: “I spent over 20 years as a city lawyer, however I reached a point where I realised that my passion for the law had been overtaken by a desire to help ensure that young people from all backgrounds have a more equal chance to succeed in life. I’d always been a champion of diversity in the legal world and increasingly felt that progress was far too slow and, in some respects might even be going backwards. You need to reach students early to set them on track for a career like law. I wanted set young people, especially those from less privileged backgrounds, on the right path and help them to fulfill their aspirations.”

Lucy Kellaway added: “I changed career because I found I wasn’t learning anymore. Re-training as a teacher has been incredibly hard - but also rejuvenating. The teenagers I teach are so rewarding I look back on my old life with no regret whatsoever. I am proud of what I'm trying to do in the classroom and proud of my fellow Now Teachers.”

Nick Newman, CEO of National Careers Week, said: “One of our key goals is to help young people make informed choices about jobs and careers – but we also know the need for this doesn’t stop once you’ve got your first job. Career advice is for everyone, and we should focus on lifelong learning and the portability of skills. Now Teach’s research demonstrates that we need to spread this message even further, so that people feel proud of their work and engaged in things that do matter to them.”

Now Teach has supported over 120 people to retrain as teachers and we are recruiting for new trainees now. It’s challenging to start again at the bottom, but with the right support it’s eminently possible. But to tackle the wider issue of career dissatisfaction, we need a variety of structured paths into new professions. Such routes can broaden the appeal of career change and support those looking for a new start.

Now Teach is currently recruiting in London, the West Midlands, East Anglia and Hastings. Participants must be eligible to train as a teacher and have the appropriate qualifications to teach their desired subject. The Now Teach recruitment team support people through the entire applications process.

If you have any questions about career changing the please get in touch.

It’s challenging to start again at the bottom, but with the right support it’s eminently possible. 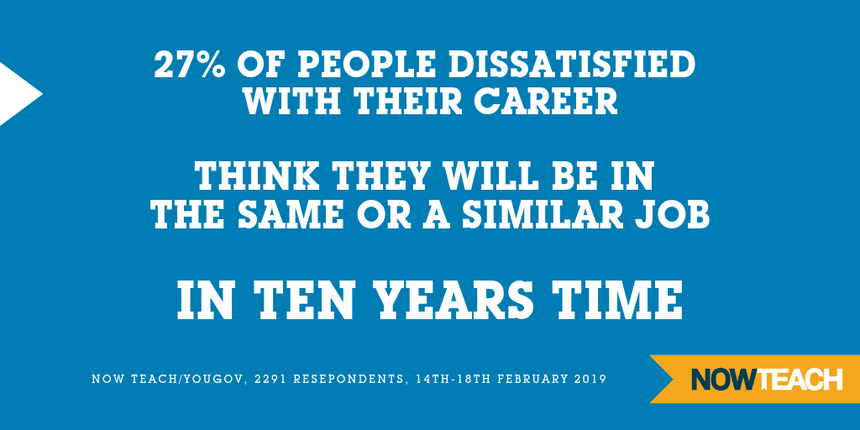