Retraining as a teacher means leaving behind status and the hierarchy you’ve enjoyed in your first career. Our Now Teachers share how they coped with the shift in seniority – and the unexpected perks.

If you’ve built up a career over a number of years, you probably enjoy an elevated status at work. You don’t have to be the CEO, or even a ‘Head of’ but the fact is you know how to do your job and have the track record to prove it.

Swapping your comfort zone for a whole new career in teaching means giving that up and starting over again. Nilesh Goswami, a trainee Geography teacher puts this change bluntly: ‘One of the biggest challenges is that I’ve been at the top of the food chain in my organisations, and now I’m thrust back down at the bottom.’

And it’s not only your perception that matters – often it’s others around who you struggle to understand why you’d ditch the precious corner office for teaching. ‘My friends and family were initially bewildered, as I spent 22 years climbing up a very difficult career ladder.’ says Julian Wood, who swapped the corporate world for teaching Biology at Ark Elvin Academy.

From seasoned expert to beginner

‘We’re really bound up in what we do, so it’s quite an existential adjustment to deal with,’ agrees Katie Waldegrave, director of Now Teach. ‘It would be extraordinary if people didn’t feel it – they’re going from being experts and being taken seriously to starting again.’

James Hardman, part of our 2017 intake, is able to reflect now on how he struggled to adjust to this huge shift. ‘Swapping Canary Wharf for an inner city comp was a big culture shock,’ he says. ‘Emotionally that first year was very tough. I was used to being good at my job and I would get home on Friday exhausted and spend the holidays catching up with assignments and training manuals.’

Enjoying the freedom that comes with leaving the top

For many of our Now Teachers, though, they’ve discovered the unexpected delight in returning to a trainee position –’ being at the bottom of the pile again at work is quite liberating’ says Guy Bowles, a CEO-turned Maths teacher.

Nilesh Goswami agrees, saying: ‘It’s actually quite nice being in a frontline role with a set of responsibilities, but not necessarily that involved with the management side.’ And our Director Katie recognises that this letting go of status can be tremendously important. ‘It’s quite profound and ultimately quite liberating to go through,’ she says.

Peter Watson, a new French teacher, ‘If someone was considering teaching, the first piece of advice I’d give them is to be realistic that you’re going in at the bottom; you’ll know nothing and your previous experience won’t help you at all in the first few weeks.’

While career-change is challenging, Now Teach participants do not do it alone. As Razi Hassan said, “I chose Now Teach because why wouldn’t you? I had the choice of going it alone…or having someone to provide bespoke support and a community.”

In the longer term those career experiences will become valuable but at the start there will be steep learning curve, so you need a strong sense of who you are if you’re considering starting again.

If you think you're up for the challenge, then express your interest in our programme and speak to our recruitment team.

This letting go of status can be tremendously important. ‘It’s quite profound and ultimately quite liberating to go through.’ 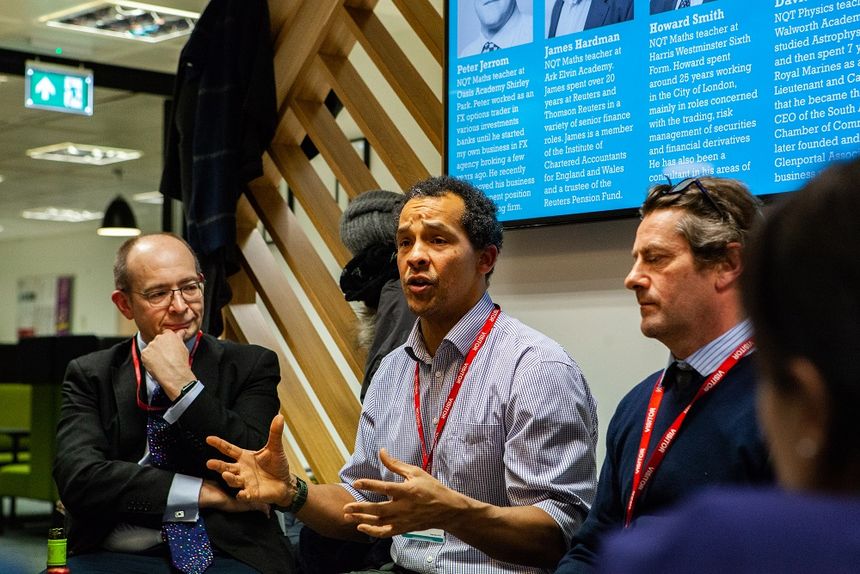