This is an edited version of an article originally published by The Telegraph on 7 May 2019. You can read the full article by Harry de Quetteville here.

After a bank holiday weekend, it is easy to find your mind drifting towards the prospect of pastures new: training in something entirely different, perhaps, switching the office for life as an architect or engineer, gardener or restaurateur.

The ONS has just released statistics showing that a record number of middle-aged people are “over-qualified” for their jobs. Almost one in five 35-49 year-olds fit that bill, apparently, and the reason is simple: huge numbers of us are starting all over again in a second career, and consequently have voluntarily put ourselves at the bottom of the ladder in an entirely new profession.

It seems mad. But as life – demographics tell us – is getting longer, there is time enough for several successful careers. Not to mention the fact that the old ones, with job security and gold-plated pensions, are now in scarce supply.

So maybe it’s not such a risk to pack up and jump ship. Maybe learning new skills and giving something back is actually the responsible thing to do, capable of keeping you sharp, more resilient; a better employee

That was the case for Khasruz Zaman, 43, who last September gave up a 22-year career as a City lawyer to become a maths teacher in Walworth, South London. It’s a challenging school, but making a difference at the sharp end of education was part of the point for Zaman, who was born in Bangladesh, and whose father was a steel worker. “I did some work on social mobility in the City, and it got to the point where I got more out of that that I did out of my law work. I realised that was where my passion was.”

But there was still a nine-month process of mulling things over and discussing the move with his wife before he handed in his notice. “You have to be realistic,” he says. “You have to understand the effect it will have on your finances, on your social life even. Some of my friends in the City thought I was crazy, giving it up at the peak of my career.”

There have, undoubtedly, been tough times: “Children miss nothing,” he says, which can “suck the energy right out of you.” But he has been in the classroom from day one, able to retrain on the job, which has delivered the emotional reward he was after instantaneously. “In terms of purpose I’ve no doubt this is the right decision,” he explains. “It’s all a question of how sustainable it is.”

Cath Urquhart, by contrast, was driven to change precisely to sustain her career. She had always been interested in law, but a career writing about travel won out. By her late 30s, though, fearful that “redundancy would beckon,” she questioned “whether I could do the same thing for the next 25 years.” And so she asked herself: “How do I stay in control? How do I futureproof my life?”

The answer came in 2007 when she handed in her notice – a decision which, even on her last day in the office, left her feeling “free and happy”. But the transition took more than three years: a two-year Law Conversion Course, then the Bar Vocational Course and the hunt for a pupillage.

“You leave status and seniority behind, and the waters close over your head very quickly,” she says. “You go out fresh into the world and are starting from the bottom.”

Some of that can be fun. Cath enjoyed a second bite at exuberant student life, but without the hangovers or hangups. And when it did come to her first cases in court, appearing experienced was an advantage, especially when those opposite her were often just 23.

“Clients were happy, even judges probably paused looking at me,” she says. But there are disadvantages too. Friends attached to one job, or the income that comes with it, can disappear. Looking back, she says, “it was a huge shift – intellectual, social, financial. I feel I stepped into a completely different life.”

But perhaps no one has made a more profound switch than Ben Stilman*, 42, whose job as an underwater cameraman involved paddling through Borneo before, in 2011, he came home to Britain to train as a paramedic.

He had met the woman he wanted to marry, and found himself suddenly keen to exchange the freelance life for something that was both worthwhile and secure. “We sat down and went through the things I really wanted to do in life,” he says.

“A friend had become a paramedic, I remembered that. So then it was about working out how to do it. Looking back I had no idea.”

He approached the ambulance service and got a job in the control room, and went from there to a three-year university course, with training on the job from the second year.

“Every day I have no idea what’s coming next. It’s like playing the jackpot – it can be terrorist attack, a shooting, delivering a baby, standing next to someone having open heart surgery on the pavement with the helicopter crew standing by.”

Ben happily admits that the awe in which children (and adults) hold the emergency services adds lustre to his life. But lustre doesn’t pay the bills. “There are a lot of people amazed I’m doing it, but you have to accept it’s not a well-paid job,” he says. “You can’t feel bitter about your wages. You have to have accepted that in your heart.”

He offers one defining tip for those following in his footsteps. “It’s not a midlife crisis,” he says. Talking to Urquhart and Zaman, it is clear that they feel the same; that there is something profound yet instinctive in their half-time switch which makes it anything but flippant. It’s not easy for them identify what it is, precisely. But they all feel it.

“Until you’re doing it for real, it’s impossible to fathom just how massive it can be,” says Zaman. “My identity has changed.”

“In terms of purpose I’ve no doubt this is the right decision.” 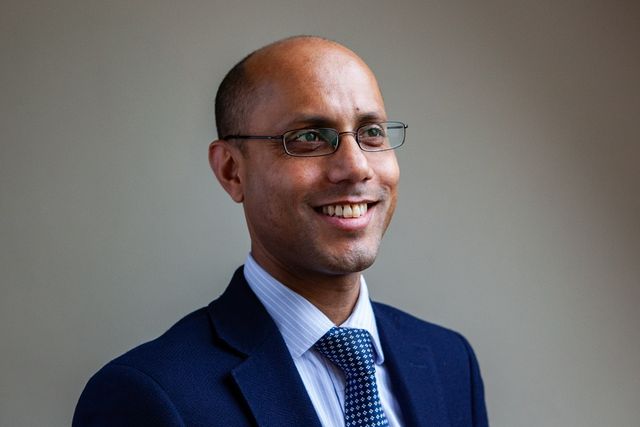 Teaching was always on the menu
Now Teach

Getting the Challenge Back
Now Teach