With 30 or so teenagers to control for six hours a day, five days a week, not to mention piles of marking and lesson planning, it’s by no means a career choice for the faint-hearted – but Lucy Kellaway is on a mission to get older professionals into the world of education and retraining as teachers.

Following a career as a journalist, including more than 30 years at the Financial Times, she founded charity Now Teach, has since qualified as a teacher herself, and convinced more than 100 others to do the same. People Management asked her about changing careers in her fifties, and why more organisations should be open to older trainees.

Why might someone decide to change career later in life?

We’re living so much longer, which means our working lives are longer. When I started out, I  thought I’d be retiring at 60, but that idea seems preposterous now. And even if I could, I don’t want to. Some people who have had successful corporate careers feel a sense of ‘what good did I really do?’ and are very motivated by the thought of giving something back. All sorts of people reach that stage and want to try something new. They’ve got bags of experience and are hooked on the idea of a new career that’s tangibly useful.

What can an older professional bring to a teaching role that a graduate can’t?

We’re able to offer decades of world experience. I am much better able to talk to my students about what working life is going to be like and what sort of skills they’re going to need than somebody who has only ever been a teacher. We’re also good at fixing up work experience and other careers stuff too.

The workload is high – I’m not saying too high – but because we’re older, we know how to manage our time. I definitely handle it better than I would have done when I was 22.

But I’m not saying we’re better at everything – I was terrible with technology. And it’s a lot longer since I was at school, so I had a lot of adjusting to do. I made a slow start.

Is training older career changers the answer to the teacher shortage?

It’s not the answer, but it’s an answer. It’s an absolutely massive crisis. Too many teachers are leaving the profession, and lots are not wanting to join because they’re frightened the workload is going to be too hard. We need more teachers, and we need to retain the teachers we have better.

Have you experienced any stigma over changing career later in life?

I’ve actually found the reverse. I had thought those with grand jobs like senior corporate lawyer who joined Now Teach would have to abandon their status and money, because teaching has a woefully low status in this country, but we did a survey and found our status had actually risen in the eyes of people we met. I think choosing to do this, as opposed to needing to do it, gets a lot of respect, because it is bloody hard work. But of course, there are still some people who think you’re nuts.

What holds people back from pursuing a different career?

We still have it fixed in our heads that we’ll continue to earn more and more until we retire at 60-ish, but obviously if you change career, your salary will drop because you’re not experienced any more. That’s difficult, but we need to have a financial planning system in place. I saved money for a few years in order to be able to do this. We just need to think through the implications and have different expectations – people should be able to start all over again at any point, and I don’t think teaching is special. I don’t see why you shouldn’t decide you want to be a dentist when you’re 55, and why we can’t just be a lot more fluid about it.

Employers also need to be more open – those that don’t think about hiring in this way are losing a lot of talent. We’re an ageing population, so before long they’ll have to start doing it anyway, whether they like it or not.

What advice would you give someone considering switching to teaching?

At Now Teach we make it very clear that if someone thinks they can do this as a hobby, just forget it. They need to be absolutely determined, and it will probably be the hardest thing they’ve ever done. They need to really want to spend their entire day with teenagers, and humble enough to take orders from people who might be younger than their own children. But they should just do it – it’s not as scary as they think. Or maybe it is as scary, but it’s good scary. It’s good to feel scared, so do it anyway.

"Employers also need to be more open – those that don’t think about hiring in this way are losing a lot of talent. We’re an ageing population, so before long they’ll have to start doing it anyway, whether they like it or not". 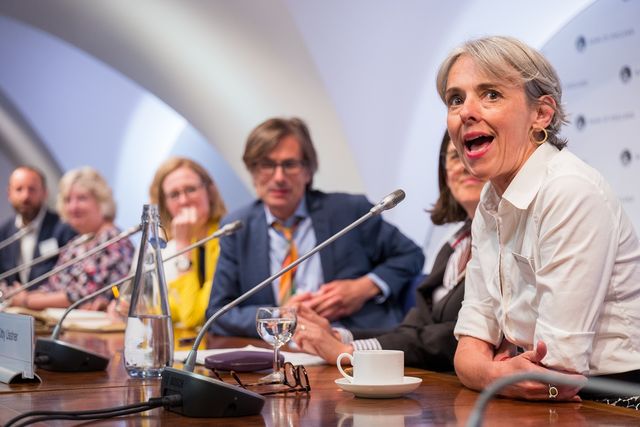 Train Travel for work means I am ploughing through the work reading Loved this @CIPD @lucykellaway “People should be able to start all over again at any point” https://t.co/FXdS697BlS

“Lucy Kellaway: “People Should Be Able To Start All Over Again At Any Point” https://t.co/4RlT1cKG3e

'I could bring much more to school'
Now Teach

Flexibility 'kept me in the profession'
Now Teach

Looking back at 2020 with Carmel Greene
Robert Dickinson

Response to NFER: ‘It is critically important that the focus not move away from initiatives which are underway to improve recruitment AND retention’.
Katie Waldegrave
repost  cancel