A recent YouGov UK-wide survey of over 50’s found that 39% of those considering a new profession want to feel that they are making a difference in their new career. However, a quarter (22%) of those interested in switching careers are not confident they have the transferable skills and experience required.

Over two in five (43%) respondents aged 50+, and looking for a new job in the future, felt that  having a career coach or mentor when you start a new role could enable them to enter a new profession. The survey, commissioned by Now Teach, the charity which supports career changers into teaching, was looking at attitudes to work amongst the over 50s.

“There is a huge pool of untapped skills and experience in the over 50’s. The government has been encouraging people to switch careers with its recent high-profile retraining campaign. Amongst over 50’s, the appetite is clearly there, but support needs to extend beyond recruitment if we are to ensure these people are successful” says co-founder of Now Teach, Katie Waldegrave.

As the government furlough scheme comes to end for many this month, there is a risk of a surge in job losses for older workers.

The Now Teach survey found nearly 5 million workers over the age of 50 (36%) are worried about their job as a result of Covid. The figure rises to 64% of furloughed workers and those currently out of work.

But the increasing population of older people may be part of the solution to professions with recruitment shortages. After financial/ job security and work-life balance, the most important motivation for those aged over 50 interested in switching career was making a difference (39%).

And office culture is not dead. For a quarter of employees, the social side of work was really important. Lucy Kellaway, co-founder of Now Teach, and Financial Times columnist who spent many years critiquing office culture says “It doesn’t surprise me at all that my generation are missing that social interaction we got from the office. I’m so glad not to be working from home, but instead be making myself useful in school and interacting with my colleagues.”

Trish Dooley is a well-being coach who works with Now Teachers throughout the early years of their new career. “Covid has given many people time to reflect and take a new perspective on work. Career-changers can face unique challenges – assimilating from a role where you have been very good at something, to becoming a complete beginner and starting from scratch can be difficult. The hard bit isn’t over once you’ve landed the job, but it does get easier!”

Jane Gregory, 52, has been teaching since September 2020. “Life is too short and our perspective changes as we get older; we spend far too long at work to do something that we don’t value and don’t enjoy. Just because you’re in your 50s, does not mean that you can’t make a change. It’s gutsy and it’s bold but that’s why being connected to a network of people who are going through a similar thing is very reassuring. It validates your gut feeling. I think lots of people have these kinds of thoughts but without programmes like Now Teach, they won’t do it.”

York Deavers, 51, decided to retrain as a teacher this year: “I’ve been reflecting on how and why and I want to work for a number of years now. I’m over 50 now and maybe that milestone birthday has had a little bit to do with the timing of my decision to change career! I knew that I wanted to have a long enough time in my new role to do it justice and do it well – have a second career rather than just dabble in something for a couple of years before retiring. I’m young enough to make a change to do something brand new.”

Alison Bryant, 55, has teaching since September 2020 said  “I do think that you see, around the age of 50, some big companies don’t invest as much in training people of certain age. When redundancies come, they ease those people out; I’ve seen it happen. I felt tired of doing and seeing the same things. A few of my friends took up portfolio careers around the age of 50 – simultaneously working their day jobs but starting business in things they had a passion for like photography or Kinesiology – maybe not as profitable but something they enjoyed and got a lot out of.  Now my enthusiasm is ignited because I’m doing something totally new.

The next generations will probably have three or four careers; we’re living and working longer, I think it would be hard to stay motivated in just one career for such a duration. I’m doing this work now because I really want to. I want to give something back – for me that’s making sure there are more linguists in the world. Having the support of organisation that would support me through my career change really tipped the scales for me."

All figures, unless otherwise stated, are from YouGov Plc.  Total sample size was 4,213 adults, of which 2,110 are over the age of 50. Fieldwork was undertaken between 15th - 20th October 2020.  The survey was carried out online. The figures have been weighted and are representative of all UK adults (aged 18+).

"Life is too short and our perspective changes as we get older; we spend far too long at work to do something that we don’t value and don’t enjoy." 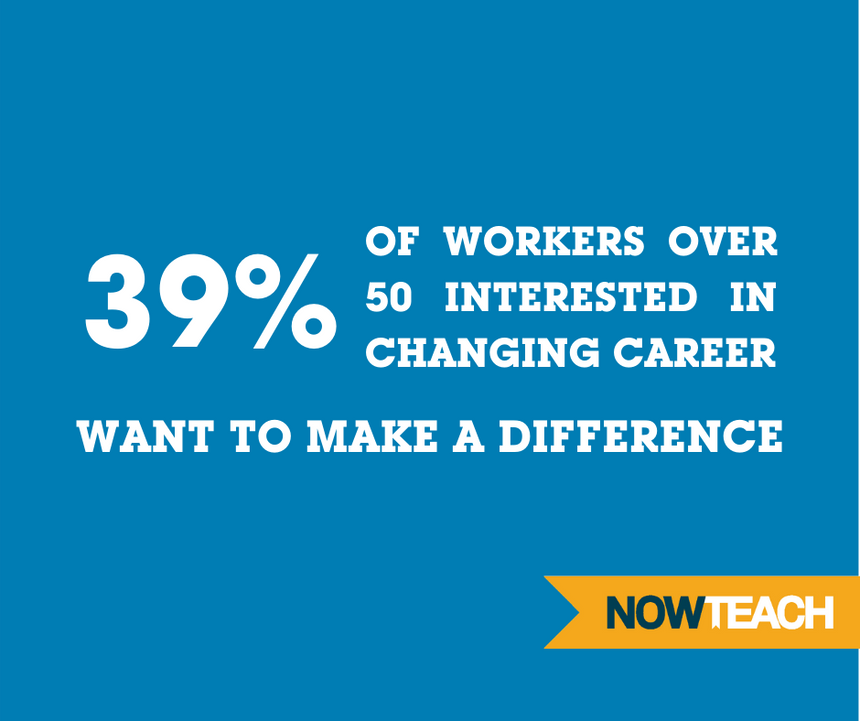